We recently had the pleasure of speaking with Dean Mattson, founder of one of the most elite career and technical education (CTE) facilities in the nation, the Manufacturing Industry Learning Lab. He revamped the woods manufacturing technology teaching model in Oregon, formerly at North Salem High School, and in Colorado at Peyton School District.

“I’m sitting here in front of two TigerStops with your banner on the wall,” says the voice on the other end of the phone. “TigerStop is one of the main reasons we grew to one of the largest woods training programs in the world.” Dean Mattson explained how he went from being a business owner and entrepreneur to being the founder of a woods manufacturing program. “Let me take you on my journey,” says Dean.

From Business Owner to Teacher 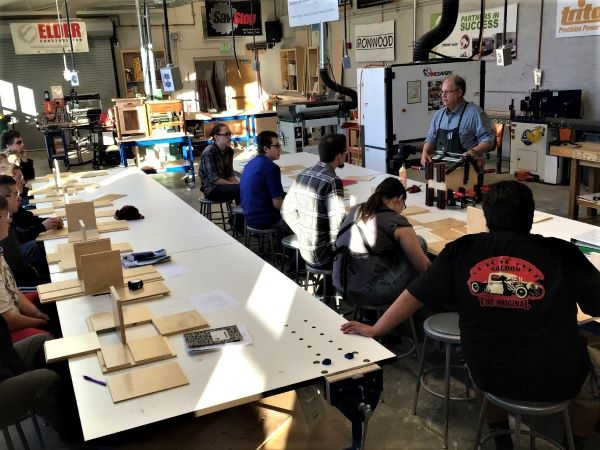 Dean’s wife tragically passed away from cancer in 2007. It felt like a rug had been pulled out from under him. Then to make things worse, the entire economy collapsed. “I was a very successful entrepreneur and had founded seven corporations in my lifetime. And at the time, it felt like everything I had ever accomplished amounted to nothing.” Dean also had two daughters in high school and college to think about. He knew he had to reinvent himself, and with the support of family, he did just that.

It just so happened that David Anderson, the legendary woods teacher at North Salem High, was retiring after 30 years. Dean was contacted to help replace David due to his extensive background in woodworking. Six months later, Dean was offered the position. “I wasn’t trained to be an educator. I was a cabinetmaker, a businessman, a corporate head hunter.” He added, “I turned corporations around, and I was very capitalistic and hardworking. I was your typical businessman and entrepreneur.”

The woodworking program at North Salem High School was what Dean described as “a dying program.” But it wasn’t the program itself that worried him the most, it was the students. Dean had no idea what kind of students he was up against. “The students were volatile, shocking, and poverty-stricken. I was shocked about public education.” But as a self-proclaimed “serious man of faith,” Dean knew he had been called to teach for a reason and was determined to help the students any way he could. 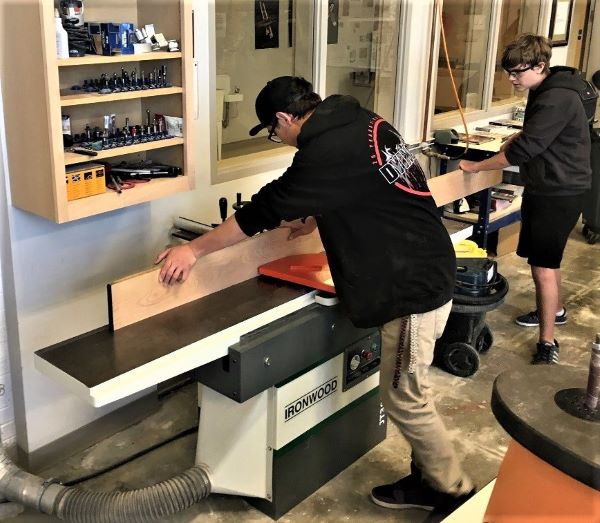 As a business strategist, Dean knew that he needed to develop a game plan. He needed a strategy to connect with his students and make woods manufacturing cool. “First, I wanted new equipment. The current equipment in the school was old and out outdated,” explained Dean.

So Dean started attending woodworking trade shows. In 2009, he made his way to the TigerStop booth at AWFS. He had used the equipment commercially in his past businesses and thought the machinery would be a good fit for his classroom. “The first TigerStop in my classroom came right off the show floor in Las Vegas. At the time, the only thing that was sexy about the program was TigerStop. TigerStop is responsible, because of the color, the logo, the brand, for being more of an attraction to the program next to the way I teach.”

Dean’s next strategy was to run his woodworking program like a business. He started treating his students like employees, giving them valuable interpersonal skills and technical woodworking skills for careers post-graduation and making them accountable. And all of a sudden, he started seeing results. The “Mattson Model” was born.

“When I started, 68% of my students were F students. All then, miraculously, students were graduating.” Students started seeing their grades improving and an influx of students signed up for his classes.

Dean helped students at North Salem High School develop the skills to pursue futures in manufacturing. After all, the manufacturing sector has the biggest impact on the economy of any other sector. 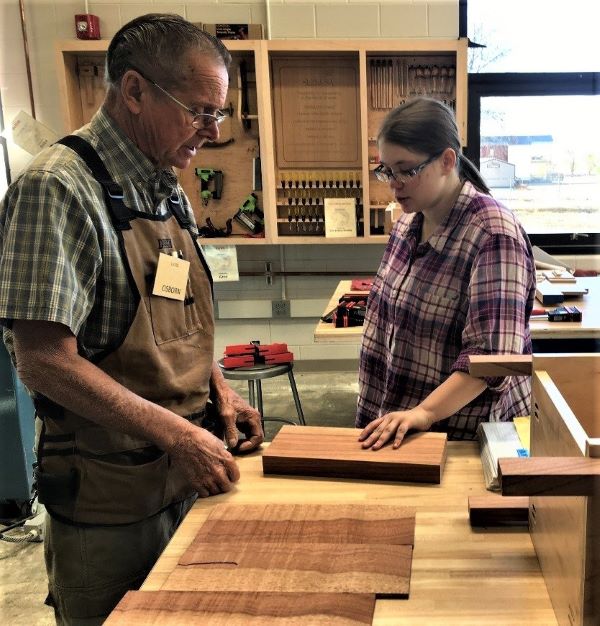 In 2015, Dean became the director of the Woods Manufacturing Program at Peyton School District located in Peyton, Colorado, taking the Mattson Model with him. In his time at Peyton, he turned an abandoned middle school into a state-of-the-art manufacturing shop specializing in career technical education. Dean partnered with many machinery companies, including TigerStop to outfit the facility.

John Davis, woodshop volunteer at Peyton explains, “It is not the high school woodshop that your grandfather attended. This premier high school woods program is available for freshmen through seniors within an hour driving distance from the facility and is home to top-of-the-line manufacturing equipment from 40 exclusive partners and supporters of the program.”

Dean Mattson notes the value TigerStop has provided. “TigerStop length stop measuring systems are sexy, and students are drawn to the program and to the woods industry because of them.”

One particularly skilled student, Austin Burke, explained why he enjoys using TigerStop equipment. “TigerStop has given me the ability to trust in my measurements and know that my cuts are accurate so I can keep my head clear and stay focused on the task at hand.” Austin won the 2017 Colorado State Championship for Cabinet Making in the Skills USA competition and competed in the National Championships in Louisville, Kentucky.

Another notable student out of the program, Christopher Harding, is now a core member of the instructor team in Colorado. He was featured on the front page of the Denver Post as one of the youngest woodworking educators in the country at age 19. Chris also received Woodworking Network’s 40 Under 40 award when he was just 20 years old. 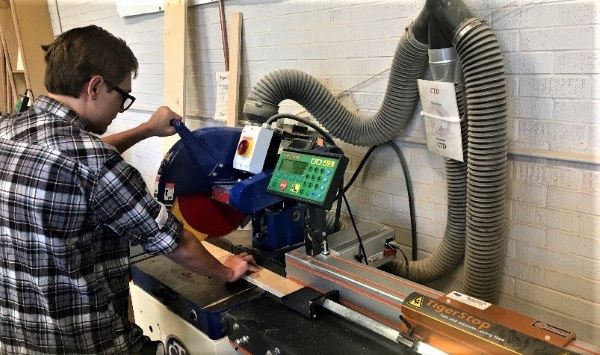 In conjunction with the Peyton and Widefield School Districts, Dean partnered with the woodworking industry to create the first-ever Manufacturing Industry Learning Lab, or MiLL, which opened in 2017 with a 46,000+ square foot building one mile southeast of the Colorado Springs airport. The MiLL’s state-of-the-art equipment features three TigerStops, two SawGears, and several TigerStop TigerFences for table saws.

Along with the graduates from the Peyton High School program, students at the MiLL facility include Yellow Ribbon and Wounded Warrior Veterans, woodworking manufacturing teachers from across the globe, and current woodworking employees sent to learn and fine-tune their skills.

A student can start with professional woods manufacturing classes as a high school freshman and complete up to four years of professional training. If high school students start the program as sophomores or juniors, they have the opportunity to finish the four-year program at the MiLL.

The Mattson Model in Action 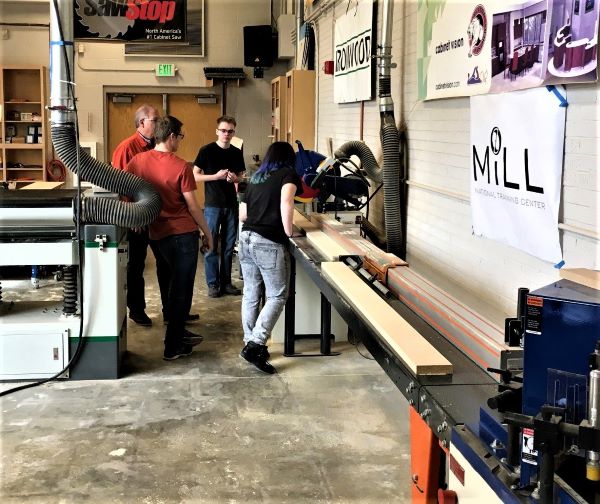 One lucky group fourth semester woodshop students at Peyton were “contracted” to design and build the reception desk for the MiLL facility. The reception desk plan required dozens of exact-tolerance parts cut down from 12-foot pieces of lumber. The parts needed to fit together perfectly, and that’s where the Peyton Woods Manufacturing Program’s TigerStops came in.

The facility’s TigerStops ensure accuracy and repeatability at the press of a button. The reception’s desktop had 15 large pieces of lumber herringboned together, 9 drawers, extensive cabinetry components, and various design features, including the MiLL logo. The students also designed a mitered handicap access portion of the desk that accommodates wheelchairs.

Students met with the MiLL’s interior architects to assure their client’s (the MiLL) needs would be met. Part of the simulation experience involved selecting company leaders and following strict deadlines to complete the reception desk.

In this type of exercise, students learn far more than simply how to use manufacturing equipment to produce a product. They learn how to organize within their peers and colleagues, interact with clients, meet customer demands, follow timelines, and set goals. Integrity and work ethic are also high on the list of skills learned to complete a finished product.

The Future of Woods Manufacturing 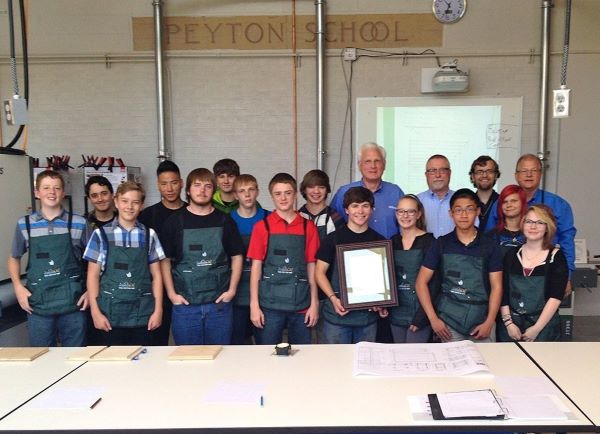 Dean has truly done the impossible. He has made a significant impact in education and simultaneously given the woodworking industry hope in the next generation of skilled workers. “To see these children’s lives change and to give them hope is great. TigerStop has helped change kids’ lives,” he said.

Putting a businessman in a classroom environment is what the woodworking and construction industries have been craving for so long. In a time marked with skilled labor shortages, the Mattson Model couldn’t have better timing. Now students can have confidence in a strong career path in cabinetmaking and woods manufacturing.