Cotterman Company is headquartered in Croswell, Michigan, and has been manufacturing ladders since 1925. Over 95 years in the ladder manufacturing business has given the company a step-up in terms of quality and innovation. And more recent shop automation has continued that trend while eliminating set-up time and excess inventory.

What started as a simple wooden track ladder company has evolved into one of the largest rolling steel ladder makers in the United States. Its towering industrial ladders and maxi lift platforms, similar to rolling staircases, are designed so workers across the country can easily and safely access out-of-reach items in commercial and industrial environments. It also produces office ladders, aluminum railings, and various track ladders.

With the opening of additional plants across the US, Cotterman Company has been able to deliver ladders at lower costs to its customers and to do so remarkably quickly and efficiently. A prompt lead time is precisely what sets Cotterman apart from its competitors. “Cotterman’s main goal is to get a quality product to the customer in a timely manner. If it’s ordered today it’s shipped tomorrow, and we don’t stock any ladders,” explains Larry Higgins, Cotterman’s plant manager.

In true lean manufacturing form, every ladder is built to order, which significantly reduces problems associated with excess waste and inventory. Plus, an “order today, ship tomorrow” philosophy puts tremendous pressure on its competition. But refining its manufacturing processes so that it could proficiently build ladders to order didn’t happen overnight. 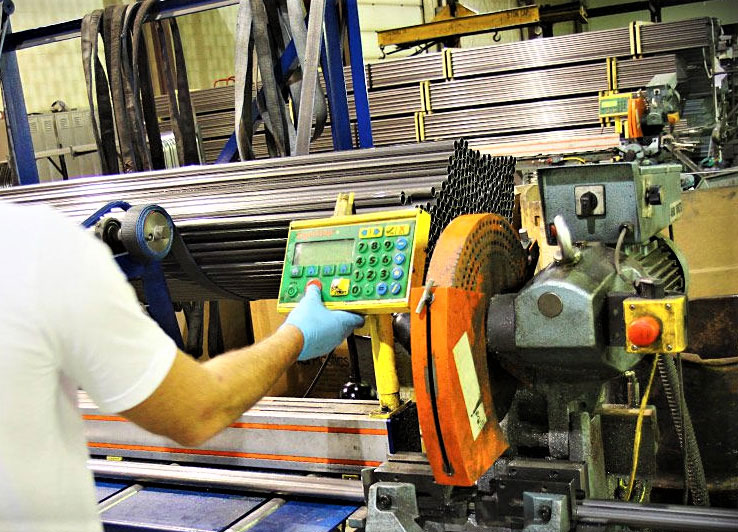 Rob Stimpson, project manager at Cotterman, paints a picture of the company’s previous inventory environment: “We would build large batches of items. We would set up our manual stops on a bender or steel cold saw, cut a million of them [parts], put them in a big bin, and they would sit there. We would basically analyze our inventory by how much dust was on it.”

Cotterman’s manufacturing engineer manager, Mark Desjardins, was wrestling with how to combat the company’s immense amount of in-process inventory without adding a great deal of complexity to his operator’s workloads. Cotterman would stock inventory for products that would only be built a handful of times per year taking up factory floor and storage space and costing the company significant dollars. Certain products requiring the use of the bending machine would have to be stocked as well because it was so costly and time-consuming to set up the bender.

To combat set-up time and inventory woes, Mark turned to a TigerStop, an automated positioner that could attach to his existing machinery and quickly cut parts to length. Being able to cut specific jobs accurately and efficiently meant no more stocking inventory to collect dust on a shelf and no more precious labor time spent setting up manual fences on machinery. Operators would simply type in the desired part length or pull up a pre-saved cut list and press start.

Cotterman installed its first TigerStop on its steel cold saw to accurately cut bundles of tubing for use in the construction of rolling warehouse ladders. Multiple tubes could be cut to the desired specification, and swiftly. Once the operations team was able to see the benefits of the increased productivity and efficiency on the chop saw station they added a TigerStop to their bender.

“The set-up time was killing us,” details Desjardins. “Now it’s so easy. We pull the number we want to run and run it without any setup. Just plug it in and go.” The payback was so substantial on the bender that Cotterman continued automating other workstations with TigerStops, including additional saws and punch presses. 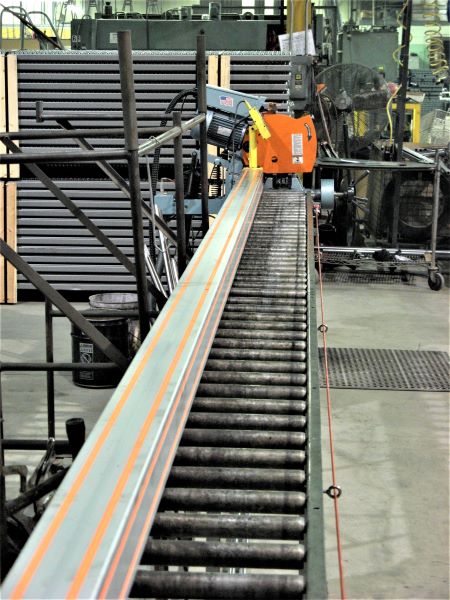 As a responsible party in ensuring machinery is installed and operated correctly and maintained over time, Mark needed automation equipment that was intuitive and reliable. Getting over the initial learning curve of any new equipment can be difficult, but TigerStop alleviated that concern.

“We have an operator that has been with the company for over 20 years, but has had almost no computer experience,” said Desjardins. “He was operating that machine within a few hours, and even though there were some concerns that he wouldn’t adapt to the technology—now he would never go back.”

The benefits of TigerStop equipment have continued to prove themselves long after implementation. Inventory is no longer a concern and labor costs have decreased along with set-up time. “Prior to implementing TigerStops, we would stock sub-assemblies of just about every SKU of our really popular items. We maintain about 6–7,000 finished good items. Stocking every single one of these items was basically impossible,” explains Rob Stimpson. “Today, what we give to our customers is product consistency. We went from a 10-day lead time to 24 hours,” shares Rob.

“The steel warehouse was full of steel and now it’s maybe half full, and yet our throughput is up probably 50%,” says Mark. “Using the TigerStop, we save probably 50% of labor costs. It used to take forever to set up a job and now it’s down to seconds. We used to always say plus or minus 1/8 of an inch was pretty close for us and now we’re cutting parts ten-thousandths of an inch and it’s holding all day long. TigerStop exceeded our expectations. They are easy to set up and they completely changed the way we do business. No more inventory, no hassle, no mistakes.”

Cotterman is able to operate more efficiently as an inventory-free manufacturer. Zero warehoused inventory through just-in-time manufacturing (JIT) practices has reduced the required square footage of facility space needed to manufacture and store finished goods. Cotterman can deliver products on the fly with a 24-hour drop-ship turnaround. This has allowed it to lower production costs, increase sales, and open additional facilities throughout the country. Cotterman has done its part in not only creating manufacturing jobs, but delivering products that, in turn, help manufacturers improve their day-to-day operations and jobsite safety.