“Every year it gets more and more difficult to stay productive and competitive as a manufacturer in the United States, so you have to think of ways outside of the box.” – Andy Schwall, United Enertech

The story of HVAC manufacturer United Enertech began in the early 1940s when Paul Tate, a Chicago School of Engineering graduate, aspired to open his own refrigeration business. Paul was drafted into the war, and his dream was put on hold. When he returned from the war, he began constructing the building that would house his future business. Everything was in order, but at the last moment, tragedy struck, and Paul passed away.

Paul’s son, William (Bill) Tate, made it his life’s mission to finish what his father had started; to see his father’s refrigeration dream through. Bill diligently studied his father’s engineering school books. He studied them so adamantly and so thoroughly that, within a year’s time, he was able to recite the books verbatim.

By 1969 Bill had completed his schooling at the University of Tennessee at Chattanooga, where he had earned additional HVAC (heating, ventilating, and air conditioning) certifications. He decided it was finally time to open up his father’s dream business.

Today, the company is known as United Enertech Corporation and remains a family-owned and operated business supplying louvers, dampers, shutters, roof curbs, and many other air movement and air control products. They are an American-owned and operated HVAC manufacturer in the heart of the Tennessee Valley in Chattanooga.

United Enertech makes it their goal to meet their customers’ needs for quality and speed while maintaining the flexibility to produce custom products with custom specifications. This is their competitive advantage, and it requires a highly organized manufacturing process and reliable equipment.

“Our niche market is being able to do quick turn arounds of just about anything. We have a rush program that allows customers to specify how fast they need something,” explains Jason Price, United Enertech’s manufacturing engineer.

In addition to producing HVAC systems, United Enertech also manufactures a new line of blast-resistant products, including blast-resistant louvers and dampers for civil defense and petrochemical companies. With such a diverse product line, accuracy in their various manufacturing processes is critical to products getting out the door in a timely manner. Which is exactly why United Enertech’s local machinery distributor, Wakefield Equipment, suggested they look into purchasing a TigerStop material positioner.

“Before we were using TigerStops we could have a completed product and it would go to quality control and the measurement would be off. So that means the whole thing would have to come back apart, and have to be re-sawed. Anytime you are re-sawing, you are losing money,” says Andy Schwall, United Enertech’s chief operating officer.

Not only were products cut inaccurately, setup was taking a tremendous amount of time. “Before we had the TigerStops the setups were taking longer, repeatability was very bad, and the accuracy was horrible. The throughput through the saws was extremely slow,” explains Andy.

United Enertech’s previous way of measuring parts for cutoff with a tape measure was flawed. Achieving product conformity was difficult and a great deal of time and labor went into correcting miscut parts. “Because of TigerStop we realized that everyone’s tape measure was different and had a different amount of wear. Having a guy out there with a tape measure, measuring each individual piece, or moving a mechanical stop every time, just isn’t cost effective or efficient.”

This is especially true when using thousands and thousands of miles in linear feet of extrusion per year, non-confirming products pile up rapidly. To keep inaccuracies at bay, United Enertech relies on their TigerStops. “All of your Quality Control starts with the TigerStop. You know everything else down the line is going to be correct,” says Andy Schwall.

Equipment Integration Is Easy with TigerStop 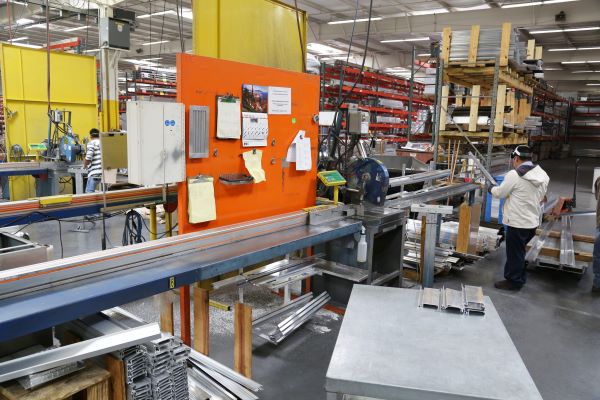 Integrating new equipment into a process can be a daunting task. Ensuring employees can quickly learn how to use new equipment is not always an easy feat. Thankfully, the material positioners have a very low learning curve. Jason describes his experience, “When I started I had never heard of TigerStop. Within an hour, I was able to program it to do whatever I needed to do, and be able to help support the guys out there fabricating.”

Because TigerStops work in multiple languages, anyone can use them, regardless of language or cultural differences. “We have a diverse workforce, and in some cases English may not be their first language. Even with that barrier, learning how to operate a TigerStop has not ever been a problem.”

We asked Andy if price was ever an issue for United Enertech when the time to purchase came around. “Beacause the TigerStop can be retrofitted to an older machine, it’s easier to justify that purchase because you’re not having to throw away your older machine, you can just add it on to your existing machine. Because a piece of equipment is old doesn’t mean that it’s worthless if you can find a new technology, such as TigerStop, to enhance what it does,” clarifies United Enertech’s COO.

In addition, you aren’t limited to using a TigerStop on one type of machine. There are countless applications where people can come up with creative manufacturing solutions. For instance, once United Enertech saw the success of TigerStops on their cutoff equipment, they started using TigerStops for accurately punching parts as well.

“The versatility of the TigerStop, being able to connect it to existing machinery, you know being able to attach it to a hydraulic press or a mechanical press to do repeated patterns, has helped us save a lot of time,” explains Jason. “In the situations in the plant where we are using the TigerStop for something other than just cut to length applications the Advanced Interconnect Kit has allowed us to be nearly an autonomous operation. The operator verifies what they want to do and they program it into the TigerStop and the Advanced Interconnect Kit (AIK) allows it to run through that program and punch the pattern that they want without needing to stop and verify each hole.”

He continues, “A lot of our products have a very fixed spacing for the blades. A manual machine with a manual index can get that done, but it’s not the quickest way to do it, that’s why we use the TigerStop for that process. Without making a mechanical index that basically has an infinite range of adjustability—the TigerStop is the only way to do that,” says Jason. “There’s a lot of labor savings there.”

United Enertech has been very impressed with the longevity of their material positioners. “We run these machines every day and we run them hard,” says Andy. The original machine they purchased from Wakefield 14 years ago is still operating daily.

Andy describes the demanding nature of manufacturing HVAC systems in the US. “Every year it gets more and more difficult to stay productive and competitive as a manufacturer in the United States, so you have to think of ways outside of the box.” Using TigerStop equipment has allowed United Enertech to reduce manufacturing costs which has, in turn, made it possible for expansion in other areas. Today, they have over 200 employees carrying out United Enertech’s mission. To say that Bill Tate has fulfilled his father’s dream would be a huge understatement.