A Brief History of Woodworking Technology - TigerStop
Skip to content

Where Zambia meets Tanzania, an archeological site at Kalambo Falls has yielded evidence of crude woodworking tools dating back some 300,000 years. And four hundred centuries ago, Neanderthals in Europe were using stone and bone to work wood. The hand tools we use today are largely derived from Greek, Roman, and Egyptian traditions—many of them dating to before the Bronze Age. And in China, the revered carpenter Lu Ban (507–440 BC) left a legacy of knowledge and technique two and a half thousand years ago that still influences craftsmen today. The history of woodworking is a long and skilled one.

It’s All About the Tools 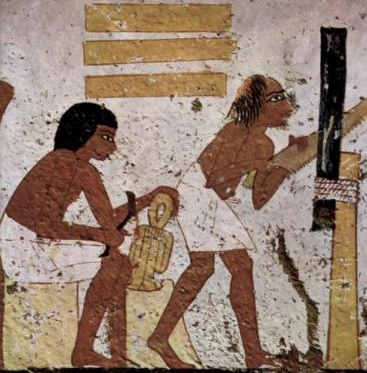 The masons and carpenters who built Europe’s medieval cathedrals and castles had a lot to do with modern woodshop tools. They used adzes and axes, chisels, braces, saws, and planes.

The late 1940s saw the beginning of a massive housing boom in America as GIs returned from World War II. Parts that had traditionally been cut to length using a handheld backsaw and a miter box could now be crosscut on a radial arm saw, and the construction process became a lot faster.

Speed and accuracy have always been a challenge for woodworkers who are competing with cabinet factories. While a team of craftsmen can build with a much higher degree of customization, they still need to be cost-conscious—delivering a better product at a competitive price. Time is money, and even with radial arm saws, measuring twice to cut once was chewing up a lot of shop time.

Fortunately, kitchens and other casework became much more uniform after the war, and that created a big opportunity for individual shops. The first numerical control machines were introduced in the 1950s, and the addition of G-code and microprocessors in the late 1970s changed NC to CNC (computer numerical control). This, along with uniform dimensions, began a revolution in the woodworking industry.

For example, cabinetmakers could now cut batches of base or wall cabinet stiles and sides that were all the same length. For the next couple of decades, woodworkers used a clamp and a block of scrap-wood to control the crosscutting process. But every time the part length changed, the setup had to be dismantled and rebuilt. It was frustrating because, no matter how much care and time a woodworker took, it was almost impossible to precisely repeat a setup. And small deviations add up: a little bit of creep on a single part will accumulate and become quite a difference in a batch.

Two events happened a couple of decades ago that changed everything. The first was an evolution from radial arm saws to miter saws that were accurate enough for the shop and yet portable enough for the jobsite.

The second event happened in 1994 and involved Spencer Dick, the owner of a manufacturing business in Vancouver, Washington. Dick became frustrated as he watched his machine operators stop over and over again to reset and recalibrate cut-off saws. And he too noticed that the end results were always a little bit off after the stop had been reset.

The solution he came up with was an automated stop system that delivered fast and accurate parts (whether working in wood, metal, or plastic) each and every time. He called it TigerStop, and it has since become a global leader in automated stop/gauge and pusher systems (under the TigerStop and SawGear brand names).

From the ancient Egyptians and Lu Ban to programmable stops and workpiece support systems, great woodworking has always been about care, accuracy, and repeatability. Thankfully, we live and work today with the benefit of thousands of years of experience, bringing the efficiencies that help our businesses grow without sacrificing the quality of craftsmanship.