When you’re root, root, rooting for the home team, wolfing down hot dogs, and inhaling cracker jacks, it’s easy to overlook one of the most important aspects of the game—the stadium! Global leader of stadium seating, Dant Clayton, is not only responsible for the seat you sit in, it’s responsible for elevating your view. Their innovative designs hit a homer every time. Learn how Dant Clayton has stayed in the game by trading in their tape measures for TigerStop automated pushers.

You can say that Dant Clayton is in touch with its Kentucky roots. Not only does it provide stadium seating for horse racing and its state’s favorite sports—baseball, basketball, and football—its very name comes in part from the Dant distillery that used to be located in what is now the company’s corporate headquarters (Kentucky does, after all, produce 95% of the world’s bourbon). The second half of its name comes from the genius behind it all, Dant Clayton’s founder, Bruce Clayton Merrick, a Kentucky native.

Dant Clayton first opened its doors for business in 1979 in a 15,000-square-foot facility located in Louisville, Kentucky. Shortly thereafter, Merrick and his team launched the venerable Alum-A-Stand, the first all-aluminum tube and channel understructure bleacher available. Aluminum proved to be five times stronger and ten times stiffer than the conventional angle frame bleachers on the market, and customers across the nation took note. 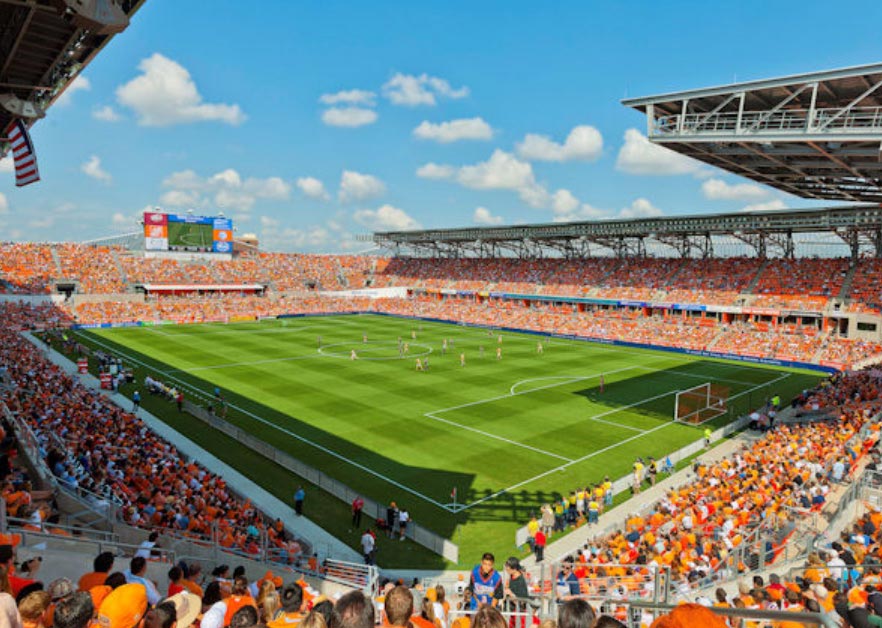 Dant Clayton has a “rich history of innovation,” explains sales and marketing director, Amanda Caufield. “It’s responsible for bringing several ‘firsts’ to the market, a trend that continues as it transitions to an indoor arena provider as well. It’s the reason Dant Clayton remains the leading maker of spectator seating on the globe. ”

Dant Clayton holds multiple patents. Its forward-thinking R&D team is constantly tinkering to bring its customers the next best innovations, such as the welded deck system, custom powder-coated finishes, and slip-resistant decks, making it safer for hardcore fans who show up rain or shine. You can find Dant Clayton’s designs hard at work in little league, high school, and professional sports arenas too, both indoors and outdoors.

Dant Clayton’s designs aren’t just a little bit famous; they’re major league famous. They include the Kentucky Horse Park and the Indy Motor Speedway. You may have watched Billie Jean King take down the competition at the USTA National Tennis Center or watched Derek Jeter run the bases at Yankee Stadium. Dant Clayton is the company behind these impressive arenas. It’s no wonder that in 2017 alone, Dant Clayton came in #35 in its first year on the Louisville Business First‘s 50 Fast Growing Companies for revenue. It also made Engineering News-Record‘s Top 600 Specialty Contractors List for impressive revenues, and Dant Clayton’s CFO, Allison Woosley, was named Business First‘s Best in Finance in the Louisville/Southern Indiana metro area. Not a bad batting average for 2017.

The Best Seat in the House 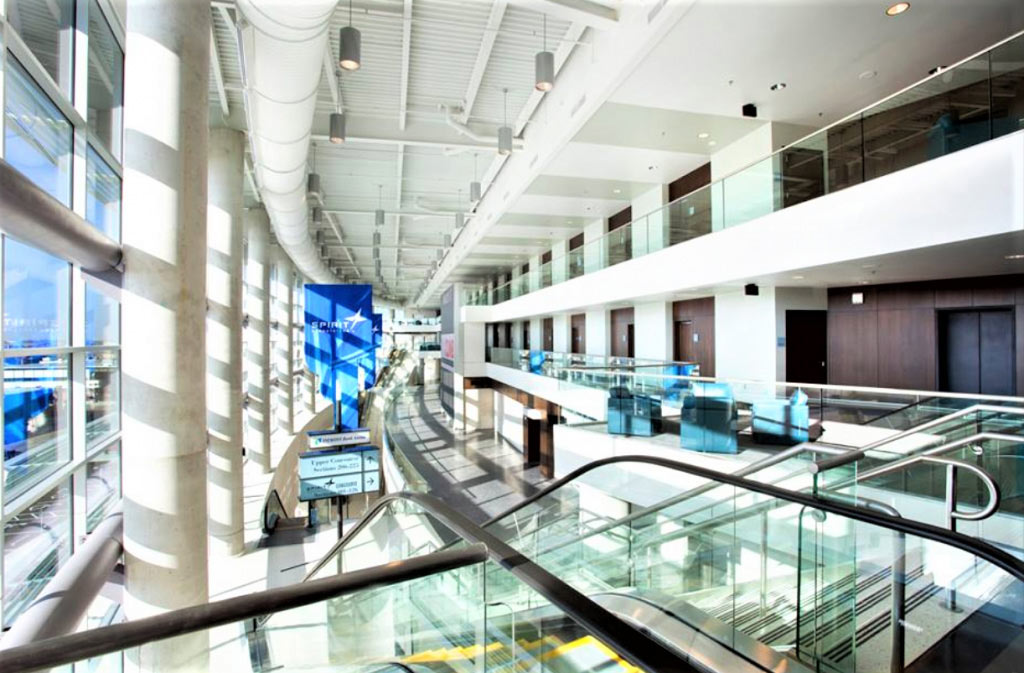 Dant Clayton maintains the best seat in the house by staying competitive at home and abroad. “I began working at Dant Clayton in 2004 during an incredibly exciting transition into our new 205,000-square-foot manufacturing facility on Algonquin Parkway. One of the primary goals during this time was to streamline and modernize our manufacturing processes and reduce excess wastes,” shares Brian McBurney, maintenance supervisor at Dant Clayton.

At the time, one of the primary workstations, a drilling station, was plagued with lengthy set-up times. “We had to cut pipe to length using a saw and tape measure, then set up the drills so they would accurately drill holes into the pipe using a tape measure once more. We were constantly setting up the parts to process,” explains Brian.

Prepping the work cell was tedious and involved unnecessary man-hours. Brian needed a robust piece of equipment to cut down on set-up time and eventually landed on the TigerRack automated pusher for aluminum and steel loads up to 720 pounds.

“We already had 3 TigerStops in place, but I needed a piece of equipment that was more robust than a standard TigerStop, something that could handle even larger impacts. Therefore, I integrated a TigerRack to our drill. Pushing capacity and durability were high on my list of important features. The TigerRack was a great choice for us because it can handle the crashes of the hits. We now have a fully functional DST (drilling, sawing, tube machine) that fully automates the drilling process,” says Brian proudly.

Glenn Hubbuch, senior manufacturing engineer at Dant Clayton, further explains the thought process behind purchasing TigerStop and TigerRack automated pushers. “At Dant Clayton we are constantly looking to improve quality, reliability, repeatability, part accuracy, and efficiency. TigerStop offers us all of those. It’s the reason we have 7 TigerStops and 1 TigerRack working day in and day out. The majority of the TigerStops are on presses, punching holes, and channels, while others assist the accurate cutting of tubing that’s anywhere from 5–28 feet long.” 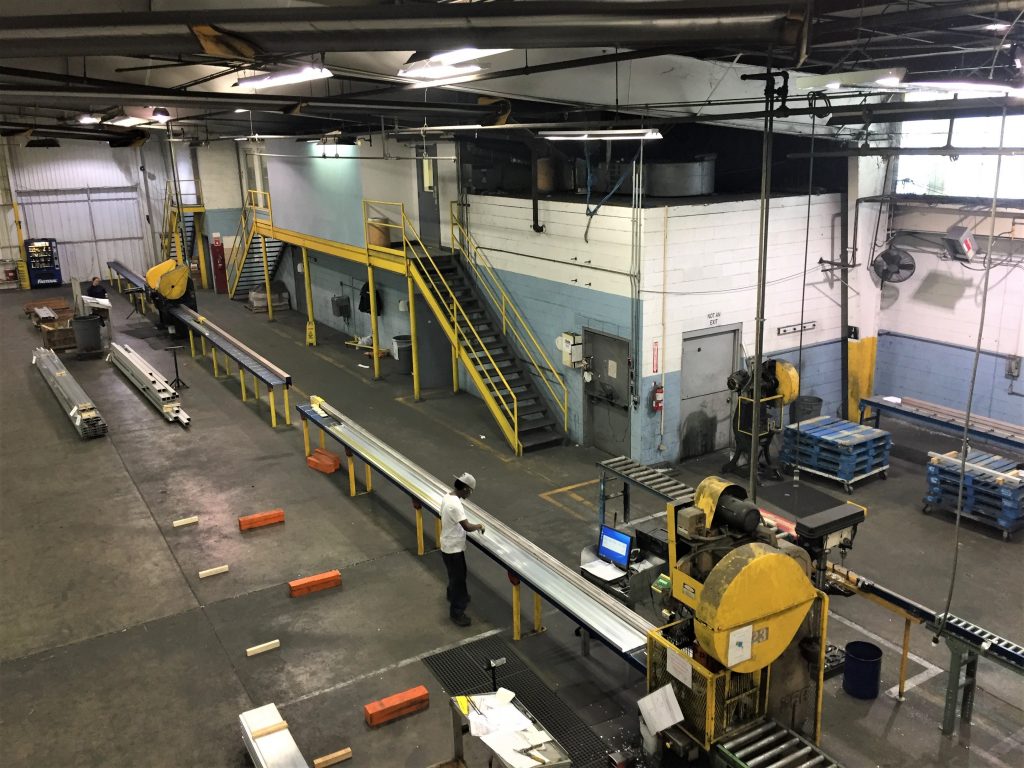 Brian explains, “Our manufacturing processes have evolved and improved by utilizing technology over inefficient conventional means such as tape measures. We use TigerStops and TigerRacks to accurately position aluminum and steel, and all of our TigerStops have Cut List Downloading and Dynamic Optimization software. Because parts are nested together using software to minimize waste, human error has been eliminated from the equation and yield has improved. There is some work that needs to be completed ahead of time with the programming, but overall there is much less labor involved resulting in improved efficiency.”

“Utilizing TigerStops is much more economical than laying out multiple parts manually. In addition, operator performance is now unmatched—their productivity levels are so much higher than before when using tape measures. What’s great about TigerStops is that they are simple to use. An operator who has never used the equipment before can be up to speed in less than a day,” adds Glenn.

Eliminating the time it takes to measure each piece of aluminum prior to cutting or drilling saves Dant Clayton an extraordinary number of hours. Trading its tape measures for TigerStop automated pushers has improved all areas of productivity, including scrap waste.

Glenn explains, “We are processing over 5 million pounds of aluminum per year. Right now we have about $4 million dollars of inventory in the warehouse just waiting to get turned into bleachers, stadiums, and railings.” 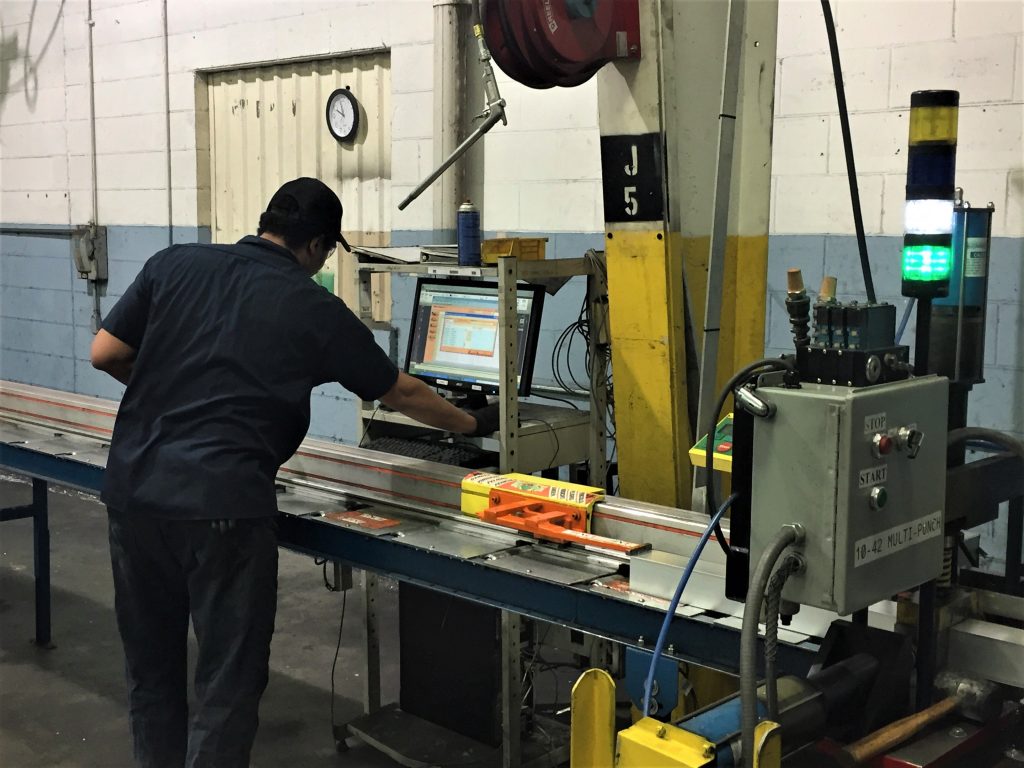 Glenn and Brian know that recycling scrap isn’t in their best interest. “If our material is $1.40 a pound for example, and we are recycling it for $0.70 a pound, we have still lost 70 cents per pound! If we can ensure that material never turns into scrap in the first place because it is measured accurately with a TigerStop, we are saving $1.40 a pound, plus all the time we would have wasted coordinating scrap pick up.”

“TigerStops are dependable and they’re very accurate. We don’t have to worry about wasted parts. To those guys who say ‘measure twice, cut once,’ we say: Get a TigerStop! Because we are only using tape measures in work cells for Quality Control purposes, to verify overall lengths of materials, quality has significantly increased. The less time spent using tape measures, the better,” says Brian.

Utilizing technology and automation has increased manufacturing opportunities, allowing Dant Clayton to be competitive in the marketplace. “Our goal is to apply technology to other work cells in our plants moving forward.”

Dant Clayton’s commitment to following its four Cs—cooperation, collaboration, competence, and coordination—has allowed it to grow and prosper as the best in the world at designing, manufacturing, fabricating, and installing bleacher and stadium systems.

Today the company has 400,000+ square feet of facility space on 25 acres. From manufacturing small park bleachers and railings to 50,000-seat stadiums, Dant Clayton continues to hit it out of the park.

“I don’t think it’s a Dant Clayton secret, but people, teamwork, and communication are what make a business successful. We have the right talent applied in the appropriate areas to align our business structure to our challenges,” says Brian.”Our success at Dant Clayton is really a team effort.”